Don't Pick Up a Banana Slug 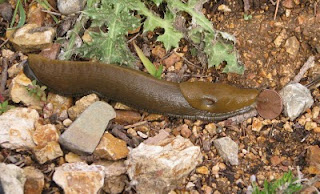 Working in the yard today I came across a critter I did not expect to see:  a Banana Slug (Ariolimax columbianus ?).  I have seen many of these in the Santa Cruz Mountains and Muir Woods, and once or twice in Tilden Park.  I thought they made their homes exclusively under redwood trees.  But yet, here he is, on rocky soil and more exposed than any I have seen before.

These slugs excrete a slimy substance to keep themselves hydrated.  A naturalist at Muir Woods told us that most animals will not eat banana slugs due to the slime they produce on their skin, but raccoons have found they can wash off the slime in water and then dine on these delicacies.  The slime evidently turns into an incredible glue according to those who have gotten it on their hands, so I would recommend letting these creatures be. 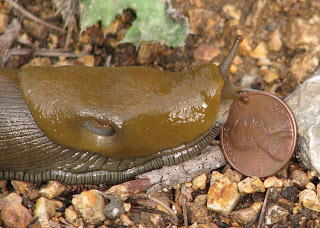 This guy is not nearly as yellow as some.  Some are truly deserving of their banana moniker, a true banana yellow and banana shape, and if you step on one, I suppose you will get a true banana squish.  This one is one of the bigger specimens I have seen, between 7 and 8 inches (~20 cm) long (see the penny in the picture for scale).   He was moving along at a sluggish pace, 1 body length in about 2 minutes, or about .00006 miles per hour by my calculations.

As lowly as the banana slug may seem, it does get respect on one college campus. Most colleges and universities here in the U.S. pick a mascot that is strong or fierce, like a lion or bear or Trojan, but the University of California at Santa Cruz chose the banana slug.   Why?  I suppose they have their reasons. 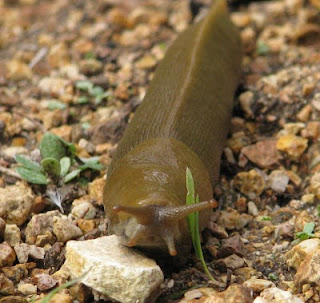