I was sitting in my car eating lunch in a gravel parking lot at the Coyote Hills Regional Park, near Newark, CA.  (see http://www.ebparks.org/parks/coyote_hills)  The local regional parks are a great place to be when you have a few minutes or a few hours to kill.  Many interesting critters come and go, including humans.  Also, as a bonus, they usually have restrooms by the parking lot, and these are sometimes difficult, but important, to find when you are out and about all day. 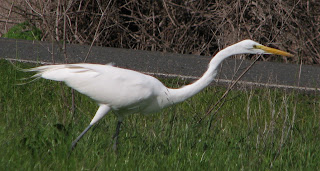 I was watching a large egret, a 'great egret' according to my field guide, poking around a small creek that led to a large marshy area.  A friend of mine once wondered out loud how these birds evolved to be pure white.  They stand out like a sore thumb, and one would think that both their prey and their predators could easily see them, and thus they would be Darwined out of existence. But they seem to survive nicely, even thrive around the San Francisco Bay. 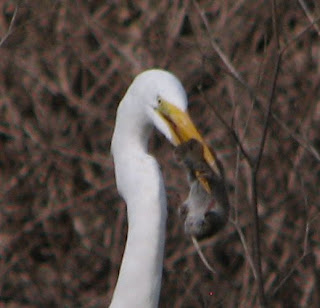 This also makes them difficult to photograph.  They are so white that if you use the standard camera settings they get washed out, with no details of their feathers or shading.  I always have to remember to adjust my camera by an f-stop or so below the automatic setting to get a decent photo of them.

I had my camera that day, and I did reduce the f-stop, and I started taking pictures of the elegant bird as it would stalk its prey by the creek, stepping one foot forward rather quickly, then standing motionless for a few seconds, then another foot forward.

After about 10 minutes of this, he jabbed his head into a marshy area and came up with rodent in his mouth!  A rodent?  I thought they ate fish!  And maybe frogs as well, but a rodent?  I continued to take pictures as he reoriented it in his beak and swallowed it down whole.  (See the slide show in the sidebar for more photos, and click on it for larger pictures) When I got home and was able to enlarge the photos, we saw that it was a gopher, and a rather large gopher, in fact.  Is this known?  That egrets will eat gophers? I wonder if we could get one to hunt in our garden!
Posted by Paul Why at 12:04 PM