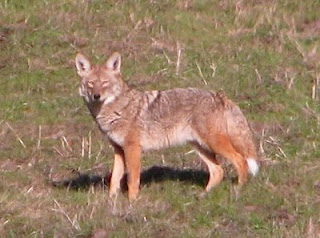 Certainly not every time we go hiking in the open spaces around the bay area, not even half or a quarter of the time, but every once in a while we come across coyotes.  They are one of the more common wild animals we see.  This guy in the photograph is quite health and handsome.  I guess there are plenty of rodents and other prey in his neck of the woods.  By contrast, there is (or was?) a rather mangy coyote in Redwood park.  The rangers called him 'grandpa' because he looked quite old. He surprised them when he fathered a litter of pups, but they still call him grandpa.  Rangers also told us he probably has canine scabies, which affects coyotes and foxes and can also infect dogs.

Some coyotes are rather shy and run off as soon as they see us, but others are much bolder and not so scared of humans.  They do keep their distance, but sometimes that distance is only 10 or 20 yards, a little too close for my comfort.  But in spite of this, I have never seen a coyote act aggressive towards me, or any other human.  Many years ago in Briones Park, on the Blue Oak Trail, a small coyote was coming towards me, and just about the time I thought I should give way to him, he went off the trail, around me, and back on to the trail behind me, and trotted away.  A year or so ago in Shell Ridge open space in Walnut Creek, a mother coyote, obviously still nursing, came within 15 yards of us as she crossed our path and went down a hillside.  She kept a wary eye on us the whole time, but never gave any sign of aggression. She was probably more worried about us.

One time I did feel threatened by a coyote, but when I think back on it, I realize it was just my own fear, and that the coyote had no intention of doing any harm.  It happened many years ago when my kids and I were walking north on the Coast Trail near Palomarin at Point Reyes National Seashore. About a mile in, a guy coming the other way said, "I wouldn't take kids down this trail. There is a coyote on the trail coming this way".  I said thanks, but went on anyway.  Around the next bend I saw him, the biggest coyote I have ever seen.  The size of a great Dane.  I stopped in my tracks, and he stopped in his, and sat down.

My kids were little back then so I quickly turned them around, and started them back down the trail.  As we headed back towards civilization I picked up a couple of the biggest rocks I could throw, in case I needed a defense.  The coyote followed us at a distance and each time I turned to look at him, he would stop and sit down. After a half mile or so, I looked back and saw him take a sharp left turn, go off the trail and over a ridge.  We never saw him again.  I must admit, a dog that sits down is taking a very non-aggressive posture.  I'm glad we let him go his way.
Posted by Paul Why at 5:54 PM

Email ThisBlogThis!Share to TwitterShare to FacebookShare to Pinterest
Labels: Coyotes