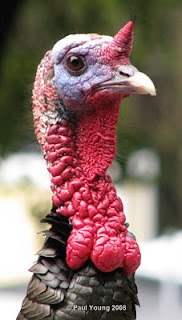 Turkeys are another wild critter that has adapted well to the suburban landscape.  The local species, Meleagris gallopavo, was introduced (or perhaps reintroduced) to Northern California by the local fish and game department in the 1960's and 1970's, and their numbers are increasing.

I grew up in an area with a couple of domestic turkey farms and knew some turkey farmers.  They used to say that turkeys are so stupid that if you leave them out in the rain, they will stare up with their mouths open and drown.  I doubt this is true, probably just an urban (or rural?) myth, but turkeys are not very bright.  There was a turkey in Walnut Creek, CA, that would stand in the middle of the road, forcing cars to go around him.  He would strut and ruffle his feathers and play chicken with the oncoming cars.  Some said he was flirting with the cars, as if to attract them as a mate!   I know that car designers go to great lengths to make their cars look sexy, so perhaps they succeeded with this demographic.

One thing I noticed in these photos is the strange red conical feature above his beak. It's called a 'snood'.  The snood will grow to several inches long and droop over his bill when the turkey is a courting. The flap of skin under his chin is called a 'wattle', and the red growths on his neck are called 'Caruncles.' Who makes up these names? 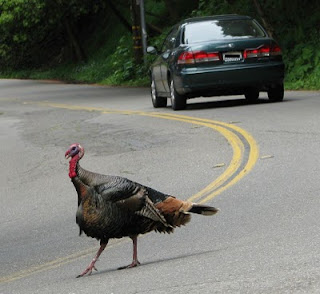 This guy was wandering down Skyline Boulevard in Oakland a few months ago, possibly looking for a mate amoung the BMW's or Mercedes that inhabit the area.  A few months later, we saw the governor of California (governor-elect at the time), Jerry Brown, jogging along the same stretch of road. Yes, politicians and turkeys sometimes have a lot in common.
Posted by Paul Why at 8:38 AM