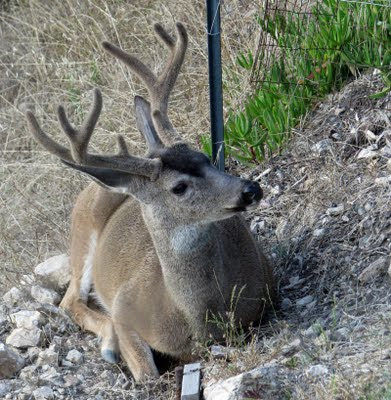 Last week, we lamented  that we had not seen any of the local black tail deer bucks lately, and our trail camera trap has not caught any either.  We have been seeing a couple of does wandering around the neighborhood, one with a couple of fawns in tow.  Then the other day when we were out for a walk we saw 2 bucks in a local school yard, but alas, I did have my camera. 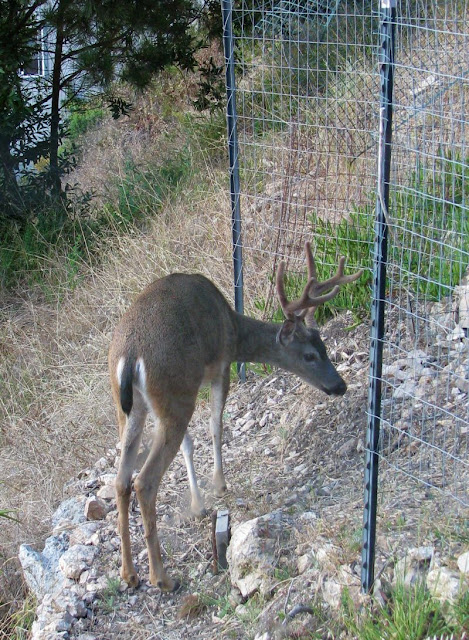 Then last night while cooking dinner, we looked out our kitchen window and there, just 15 feet from our house, was a buck.  He was looking for a way to get into our garden and munch on all those delicacies--day lilies, a lemon tree, succulents.  Fortunately, our six-foot-tall deer proof fence proved to be just that, and he gave up, munched on some greens outside of the fence, then curled up and mulled it over for awhile before sauntering away. 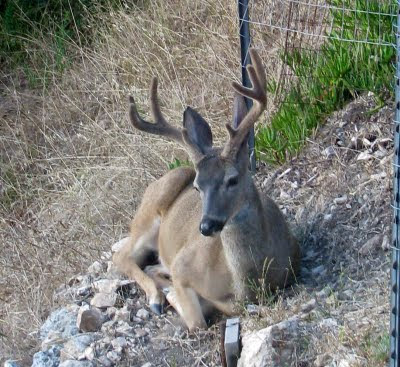 His antlers are quite large now, but they still have the velvet on them, so it looks like they may still be growing.  I hope we get a shot of the velvet coming off when that happens.

For more of our pictures of deer, click on "Deer" in labels section at the bottom of this page.
Posted by Paul Why at 9:05 AM No comments:

Email ThisBlogThis!Share to TwitterShare to FacebookShare to Pinterest
Labels: Deer 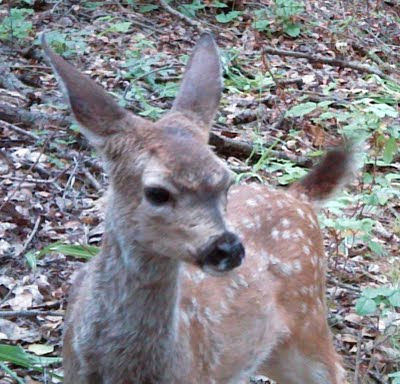 We have been moving around the trail camera to different locations in the open space parks in the hills of the east bay near Berkeley and El Cerrito, CA, and the results have been very satisfying. We've set up the camera near obvious game trails to spy on the comings and goings of our animal neighbors, often near streams that would be an attraction for thirsty critters.

This camera has proved to be a lot fun and worth the investment. Posted here are a few of the more appealing and intriguing pictures, and again, they are mostly of deer. While many are clear shots, others are more mysterious, leaving us to wonder the real identities of the flash of fur before the lens.

Click on 'Trail Camera' in the section titled 'Labels' at the bottom of the page for more pictures from our Trail Camera. 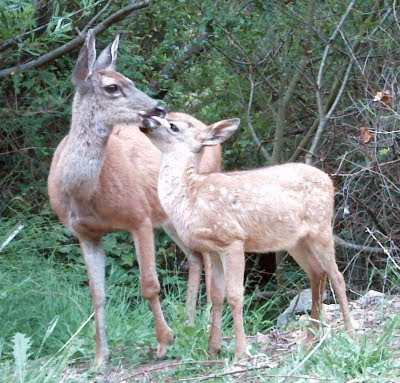 It is interesting we have not seen any bucks lately, only doe and fawns.  We would like to see how the buck's antlers have grown lately, and if they are losing their velvet yet, but no luck on this.  It is good to see that the fawn we wrote about earlier, with the swollen nose, is better.  We think it is the same fawn as in the first picture here.  It must have been due to a bee sting. 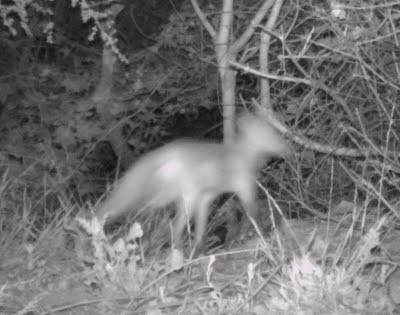 We have gotten a few pictures of other animals, but they have been at night, taken with IR, and they have been so blurry and muddy that it is often difficult to identify the critter.  We think we got several shots of a fox at one location, and perhaps a few shots of a bobcat, but it is really hard to tell.  We got a few very  blurry pictures of a  raccoon, too. There was a mountain lion sighted in El Cerrito a few weeks ago, but we are disappointed he didn't stop and pose in front of the camera while he was in town.  One animal we can't identify is posted here.  Is it a very skinny fox?  or perhaps a weasel, or a long legged  ferret, or ? 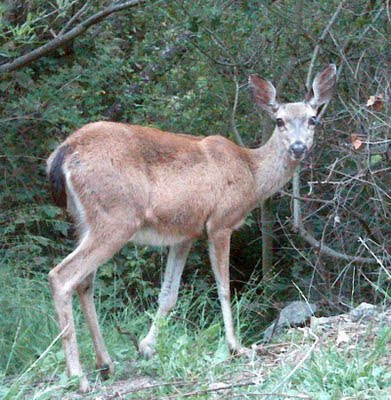 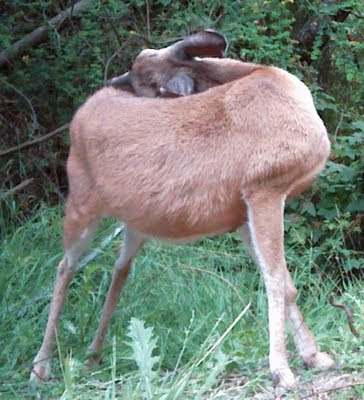 Most people around here know and respect poison oak, a native plant whose leaves and stems contain a potent oil that can cause your skin to erupt into an itchy blistering rash if you brush up against it. But few are aware that we have a more toxic poison plant common to this area.  This one can kill you if you eat at least 5 or 6 leaves. It is an invasive species, not native to Bay Area. In fact, it comes from the Mediterranean and was used as a method of execution several thousand years ago.  It is Poison Hemlock (Conium maculatum), the plant that killed Socrates about 2400 years ago.

Lots of people think that hemlock is a tree, and there is a conifer called the hemlock, but that's not where the famous (or infamous?) poison comes from.  Instead it comes from this plant in the carrot family.  Poison hemlock has lacy, almost fern-like leaves just like a carrot's, but it grows up to 8 feet tall.  It really does look like a giant carrot plant.  I would not recommend eating the root, though, as it is poisonous, too.

According to literature online, the poison works by paralyzing the muscles that keep you breathing, so you basically suffocate.  The antidote is to get in an iron lung or respirator or something that will artificially keep you breathing until the effects wear off in a few days.

These specimens were growing in Wildcat Canyon Regional Park, but they are in bloom in most open space parks around the Bay Area.
Posted by Paul Why at 2:16 PM No comments: 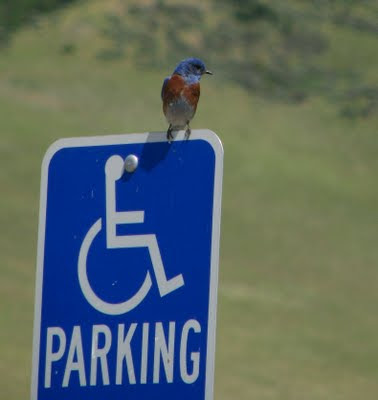 Here is a picture I shot of a bluebird (Sialia mexicana) in the parking lot at Mission Peak Regional Preserve, in Alameda County, a few years ago.  I sent it to a photo contest run by the local newspaper, the Contra Costa Times.  It won the weekly contest and was published in the paper.  One of my few claims to fame.

In any case, this bird does not look disabled to me and flew off without a problem, so he should probably use one of the standard parking spaces next time.

Youtube has an interesting clip of a bluebird hovering in flight that you can watch here.  Also, Cornell has a camera inside a bluebird nest box, and you can view it here.
Posted by Paul Why at 12:03 PM No comments:

A cross between a grasshopper and a shrimp? 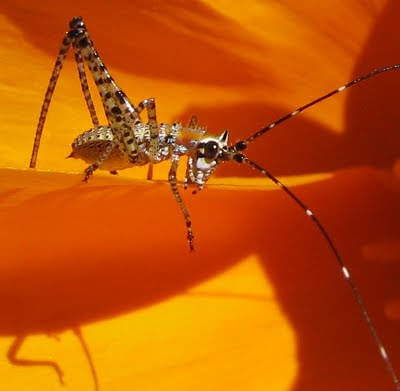 Last fall we bought a couple of packages of California Poppy (Eschscholzia californica) seeds.  We spread them around our semi-landscaped front yard, and all over our not-landscaped and wild backyard.  We really like California poppies with their bright orange and golden colors.  They brighten up the hillsides and roadsides all around California in the springtime.  And best of all, they are a drought tolerant native plant that is tough and persistent, even in poor soil. 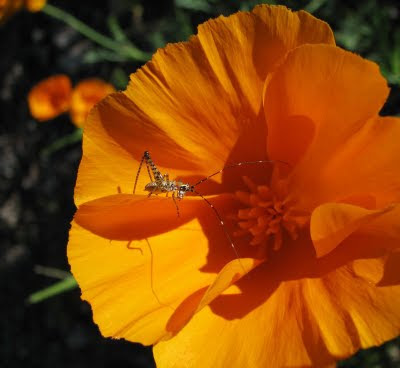 In early spring a couple of years ago, we drove to Yosemite, and along the way passed a hillside that was absolutely covered in poppies, completely orange, with very little green showing through.  The poppies are now in full bloom in our front yard, but the weeds still have the advantage in the backyard.


We are having some beautiful weather this week after a rather cool and wet spring, which has been good for our nascent garden. So the other morning I was wandering around our front yard with my camera.  I saw a bumble bee visiting some of the poppies, but I wasn't quick enough to get a photo of him.  As I looked closer, though, I did see a strange looking bug in one of the poppies and took these photos.  I was sure surprised when I viewed them on the computer and zoomed in.  A little spotted cricket?  It is less than an inch long, including the lobster-like antennas.
I found a very similar looking bug on the bugguide.net website.  The expert there says it looks like the nymph of a katydid, probably a Scudder's bush katydid, maybe Scudderia furcata.  If you are an Orthoptera expert, please let us know if this is correct.
Posted by Paul Why at 1:30 PM 1 comment: