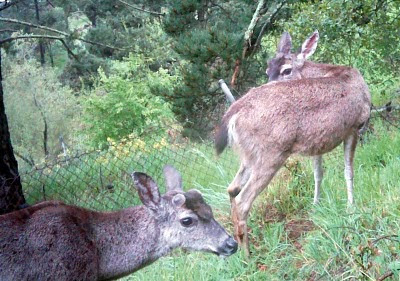 One rainy day--and we have had a lot of these lately--these two young bucks posed in front of our game camera. I always wonder how animals deal with the rain, whether they try to seek as much shelter as they can, or if they simply put up with it. These two don't seem to mind the rain, but it seems they do have an itch or two. 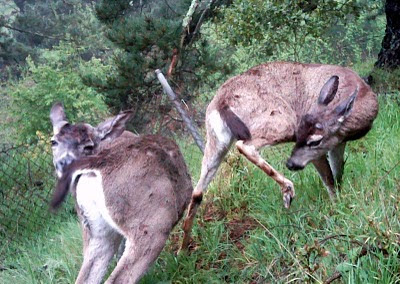 Notice that their antlers are just starting to grow back. See the velvety knobs between their eyes and ears?  These will grow into antlers over the next few months.  They will use them to attract a mate in the fall, and will lose them again in early winter. The 3rd photo is from January, when we caught a three-point buck who still had his horns.  About that same time, I saw a buck with only one antler. The lopsided headgear looked like it could give him a headache or a pain in the neck. 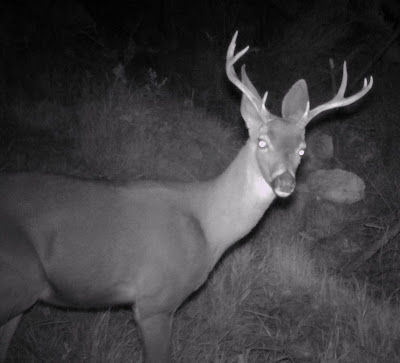 I have heard that each year the antlers will grow out larger than the year before, that yearling bucks have only a spike and they add a new point to each side each year as they grow older. But I have not been able to confirm this with any reliable source on the internet.  In fact, some of the more reliable sources say that the antler size depends more on the health of the animal or his feeding habits.  Growing antlers requires a lot of calcium, as they are basically just bone, and when bucks have difficulty getting enough calcium in their diet, their antlers are smaller.  Rodents are known to gnaw on fallen antlers to get this source of calcium.

Last year while hiking in the open space behind our house, we found an antler, and now it sits on our mantle shelf, an objet trouvé.  Perhaps over the next few months, we will see the antlers grow on these bucks and then lose their velvet covering.  If we do get more pictures, we will post them here.
Posted by Paul Why at 11:00 AM