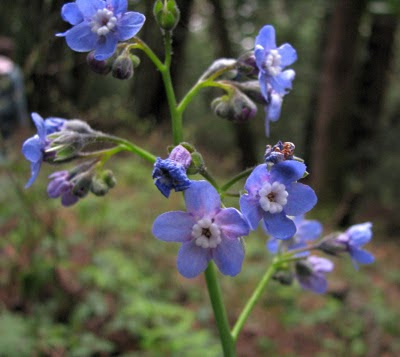 We went hiking through Redwood Regional Park last weekend (early March), mostly to see the redwood trees, but we kept our eyes open for early wildflowers.  We came across several, but the most interesting were these purplish Hound's Tongue, Cynoglossum grande.

It is a California native plant and not a problem here in the bay area, but many species of hound's tongue are considered pests or invasive species in North America and in Europe.  It is evidently quite poisonous and problem for rancher's whose cattle or sheep have eaten it.  There are many references to Hound's tongue as a medicinal plant, as a remedy for hemorrhoids and sore throat and several complaints in between.  This site claims it is an aphrodisiac, but I would not trust it, as the scientific name they give for the plant is an unrelated species from South America!

After the flowers wither, the seed pod or 'burr' that forms has prickles on it that stick to animal fur, as a way to spread the seeds over a wider area.  This is great for the propagation of this species, but a problem for me as they stick to my socks and shoelaces and are difficult to pull off.

The name refers to the leaves, not the flowers, but you could not tell from these specimens. 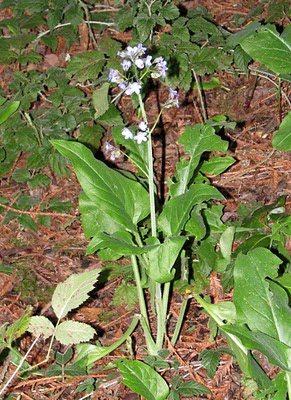