A Doe Poses for the Camera Here are a couple of very good pictures we recently got from the game camera.  This doe walked up, stopped, smiled, and if she could, I bet she would have done her best 'Miss America' wave for the camera.  Now you know where the expression 'doe eyed' came from.

Does she look pregnant?  It's hard for me to tell, but I hope she is.  Perhaps the doe in the night photo at the bottom of this post?  We'd like to see their numbers grow, not just because they are fun to watch, but they also mow the hillsides, which reduces the wildfire danger here.  According to my neighbor, there were a lot more deer in this neighborhood 20 years ago.  Even though we see them several times a week, they are usually alone or in groups of 2 or 3.  Back then there were herds of 8 to 10. We saw a doe with two spotted fawns in our backyard several times last summer.  One of the fawns looked healthy, but the other had a large lump on its neck near its head.  We thought it might be a goiter or a tumor, but when we mentioned it to a retired sheep rancher, he said it could have been due to a rattlesnake bite.  He said that sometimes when his sheep were grazing they would get bit and the area would swell up like we described.  Unfortunately, he said, the bite was usually fatal.  There are rattlesnakes in this area, we have seen them several times.  Later in the summer we saw a doe with only one fawn, and we think that the other one didn't survive, but we don't know for sure. 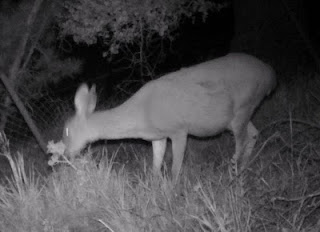 Maybe this year there will be several fawns to watch and photograph, and get into people's gardens.
Posted by Paul Why at 2:47 PM