Raccoon on the Deck 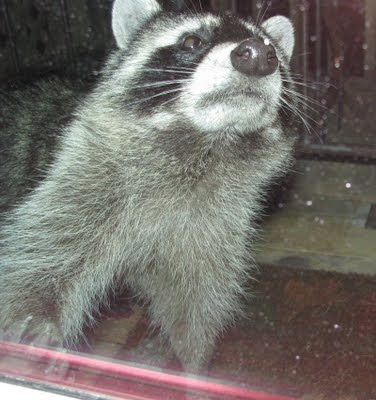 The other night, just after we fell asleep, we thought we heard some noises in the house.  I tried to ignore them at first, but I finally really sat up and listened.  Yep, there was a strange noise, but I couldn't tell where it was coming from.  We were both awake by now and  looked out the window. There was the source.  A raccoon was on the deck railing, eating birdseed out of the feeder stationed there!

I went and grabbed my camera and tried to take a couple of photos through the window.  Most of these did not come out because the flash reflected off the glass.  I was going to open the sliding glass door to try to take a better picture, but he shimmied down the railing to the deck and came right up to the door to face me down. I was sure that  if I opened it he would come right inside. 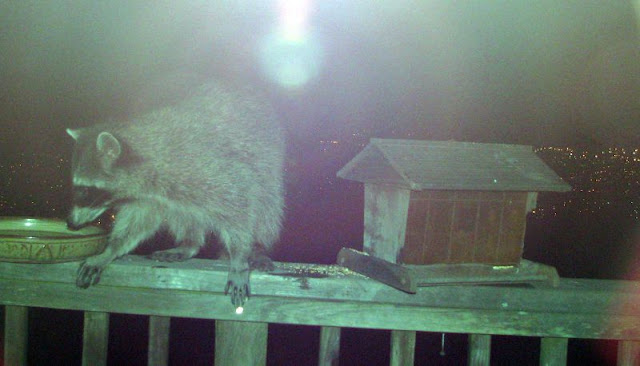 After I took another couple of photos he turned and ran down the stairs and out of sight. Then we realized one cat, Paloosh, was still outside and we were worried he might run into the raccoon. I opened the door, called his name and in a few seconds he came racing up the stairs and into our bedroom. We're pretty sure he must have passed the Masked Bandit on his way up but luckily there was no fight.

The photos posted are the only decent ones I got.  They are rather amusing.
Posted by Paul Why at 9:07 AM

Email ThisBlogThis!Share to TwitterShare to FacebookShare to Pinterest
Labels: Racoons