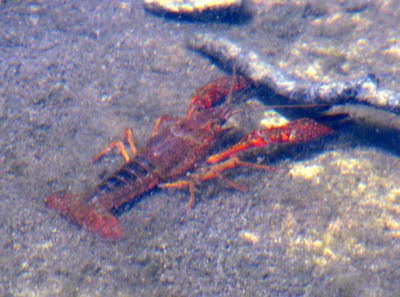 We have a cat, Ninja, who likes to go on walks with us.  Yes, I said 'cat', not 'dog'.  If we put on our shoes and jackets in the evening, she will wait by the front door and follow us out and down the street, even around the block.  We wonder what the neighbors think, "There go those critter bloggers, walking their cat again!"  We wouldn't mind, except she is slow, very slow.  She lags behind us and we worry that if we get too far ahead of her she will get lost and not be able to find her way home.  If we need exercise and want a brisk, long walk, we have to escape the house without her. 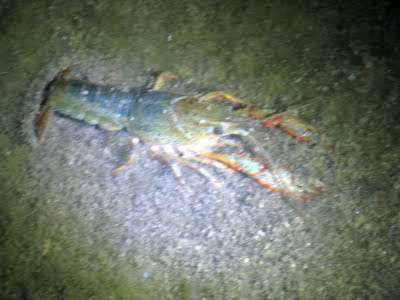 So the other night, we did just that, slipping out the front door before Ninja could squeeze out. And we did feel guilty. We walked to a nearby park that has a couple of shallow ponds.  Shining our flashlight into the ponds as we passed, lo and behold there were a slew of crawdads!  We had never seen them there in the daytime although we go to the park frequently.  I didn't have my camera--of course not!--so we returned the next evening and got some of these photos by flashlight.  (I diverted the cat's attention, again, and we darted out the door). 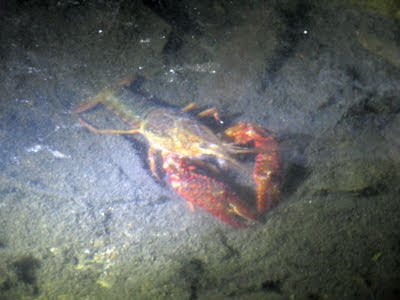 I went by the pond again the next day and found several crawdads hiding in the shade of a footbridge.  No wonder we had not seen them before.  They can burrow into the soft mud pond bottom and become barely visible. I chased one out with a stick and took a couple more pictures.  It's not easy getting a clear picture of a critter in a pond, even if the water is clear.
You say crawdad, I say crayfish.  Where I grew up, the names were interchangeable.  But neither of them seemed to fit.  If they are crawdads, are the females called crawmoms?  And crayfish?  They are certainly not a fish, more like a mini-lobster.  The names come from the the French "ecrevisse" which sounds a bit like "crayfish" if you don't speak French. 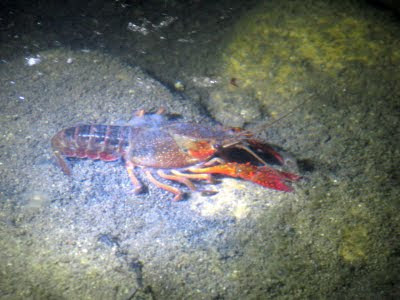 They are crustaceans and related to lobsters.  There are many species in California and some of them, including the 'signal crawfish' and the 'Red Swamp Crayfish,' are invasive.  I am not sure if the pictures here show 2 different species or if they are the same.  The redder one is about 4-5" long and is probably the invasive red swamp variety (Procambarus clarkii). The smaller one, about 3" long, with blue on it's claws may be a juvenile or perhaps a different species.  The Red Swamp crawfish are a drab color when younger, according to the Elkhorn Slough Foundation. 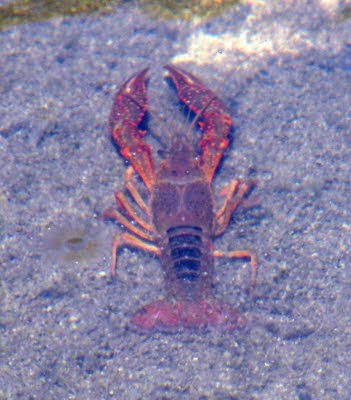 When I was a kid we would tie a bit of bacon or liver on a string on a stick and leave it on the bottom of Pajaro River for 10 minutes. When we pulled it up we would have a crawdad or 2 hanging on the string.  One time we went with a bunch or people and caught hundreds of them.  We had a party afterwards, and dined on our catch.  It was a lot of fun.  I wonder what Ninja would think of these critters?
Posted by Paul Why at 1:56 PM

Email ThisBlogThis!Share to TwitterShare to FacebookShare to Pinterest
Labels: Crawdads