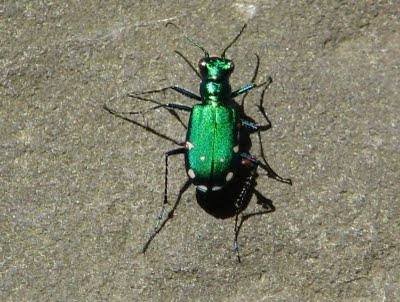 We haven't posted in a week or so because we were on vacation in New York--Long Island, Brooklyn and Manhattan, to be precise.  While we were there, we visited Wildwood State Park on the north shore of Long Island, which despite its name, is better known for a spectacularly beautiful beach on the LI Sound that stretches for a mile.  As we walked down the trail to the beach, something bright and almost iridescent green caught our eye. We spotted a half dozen of these bright green beetle critters flitting about. 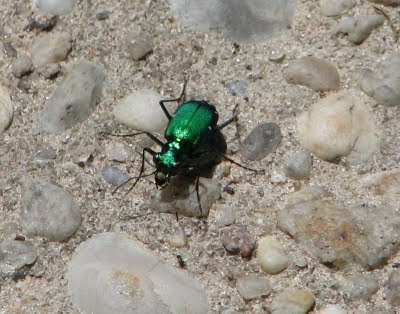 They are called 'six-spotted tiger beetles' (Cicindela sexguttata), although if you look closely it appears that one of them has 8 spots on its wings.  The metallic color makes them stand out against the vegetation and ground.  I figured it was an evolutionary strategy to warn other critters of their poison, but references say that they are eaten by a variety of birds, reptiles, rodents and other bugs without adverse effects.  A few references say they can give off a foul odor, but we didn't smell anything. 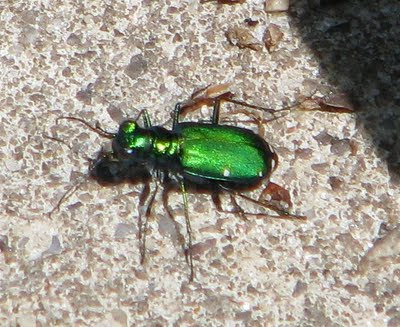 Long Island has had a particularly wet spring, which creates the perfect conditions for some not-so-pretty and really annoying insects. While visiting family there, we had to battle mosquitos and worse, hoards of no-see-ums, which aren't actually invisible and can drive you crazy with their persistent and unpleasant biting. In the Bay Area, we don't have those tiny pests--just big ones, like scorpions (see this post!) and medium sized ones, like ticks (this post).