Camels in the Backyard 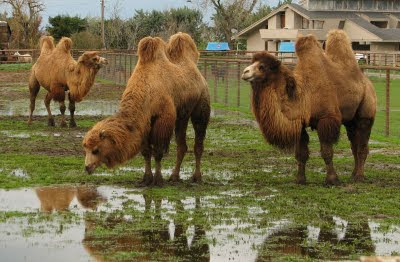 Yes, camels!  Not in our backyard, but I guess this is somebody's backyard.  I was returning last year from a visit at the newest University of California at Merced, California, driving down a country road just a few miles from the campus, when I looked to my right and saw these camels.  They were standing in a muddy pasture and looking as out of place as a duck in the desert.  Or an igloo in Ecuador.  Or a camel in California! 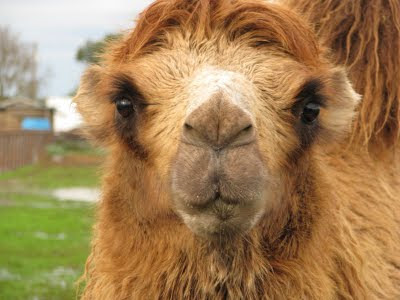 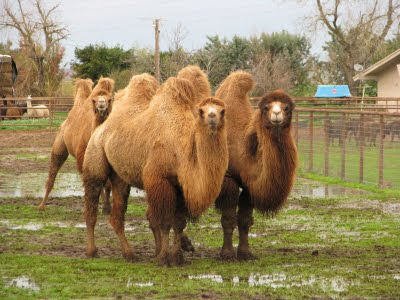 I had my camera, so I stopped and took these pictures.  One of the camels became very interested in me and came over to the fence that separated us.   Or maybe he is just a ham and wanted me to get some good closeups of his handsome(?) face?

These are the Bactrian camels (Camelus bactrianus) which once roamed wild in Mongolia and the Gobi desert but now are completely domesticated.  There were some feral camels, both Bactrian and Dromedary (with one hump) loose in the American southwest.  They had been imported for use as military vehicles, but the project was terminated in the mid 1800s, and some of the animals escaped or were let loose.  The rest were shipped to a now abandoned Army garrison at Benicia, CA and auctioned to the public.  The feral camels were last seen in 1972 and are presumed to have died out.  A large and thriving population of feral camels live in the Australian outback, and are considered, like rabbits, to be an invasive species there. 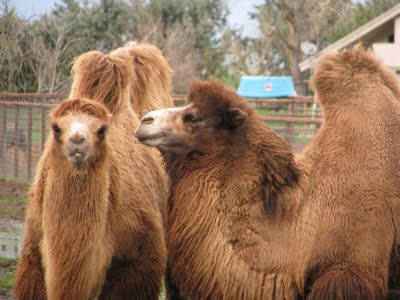 Another local angle: Fossil evidence indicates that camels evolved here in North America, then split into two groups.  One group went south and evolved into llamas, alpacas and vicunas in South America.  The other group went into Asia and evolved into Bactrian and Dromedary camels.  Evidently none stayed here.  Maybe they had a beef with the bison.
Posted by Paul Why at 9:00 AM

Email ThisBlogThis!Share to TwitterShare to FacebookShare to Pinterest
Labels: camels