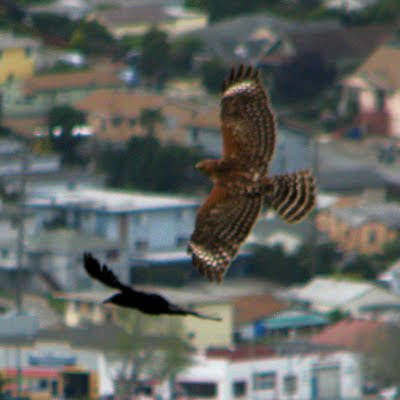 We have been watching some amazing aerial acrobatics the past few days.  The crows and the hawks have been going at each other like 12 year olds in a middle school playground.  Why can't they just get along?  I was able to get a few photos of the action, but it wasn't easy. Their maneuvers occur at light speed.  We have seen them fly upside-down with talons extended, swoop low under trees or between houses, dive with wings retracted, and twist and turn better than Snoopy and the Red Baron. They've even swooped down just above our car as we drove down the hill where the battle began. We have seen several crows gang up on one hawk and have seen a second hawk join in to a fight to help his wingman. 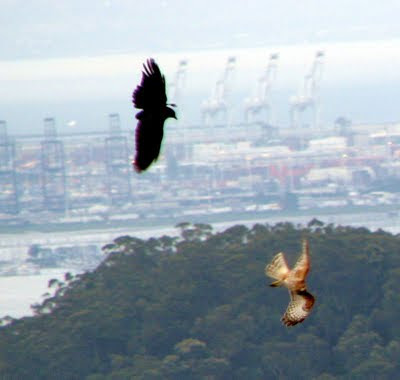 A few weeks ago we wrote that the new red-shouldered hawks and the crows were getting along nicely, but as you can see from these pictures, the honeymoon is over.  It seems to be a fair fight when these two go at it, but I notice one of the red-shouldered seems to be missing a couple of wing and tail feathers, and the crows seem to have all of theirs, so perhaps the crows have a bit of an advantage. 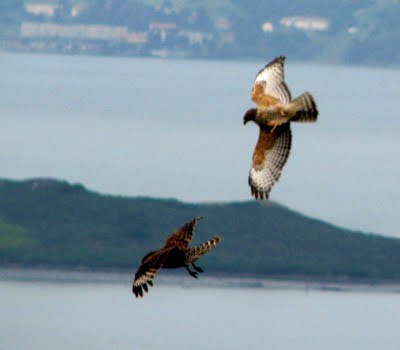 With the red-tails, it is a different story.  The crows have an edge in maneuvering if not in soaring to higher altitudes.  I don't have any pictures of the red tails here because they turn their red tails and run as soon as the fight starts.  I have seen them fight back a few times, and I pity the fool crow who gets a taste of their talons. But so far the crows seem to be much more nimble in flight and can avoid any counter attack. 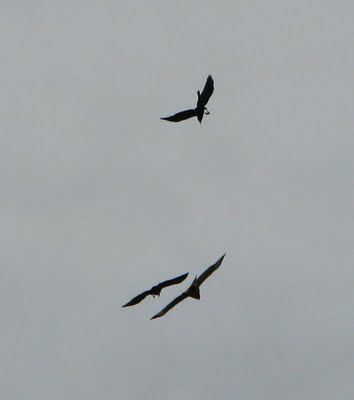