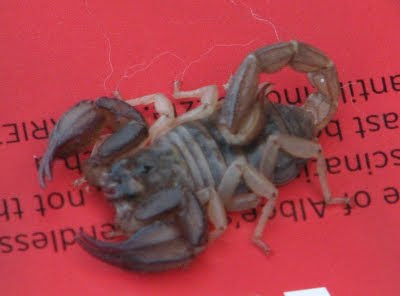 We thought scorpions lived in the desert and the only time you need to be concerned about them was when you camped out, cowboy style.  You would have to empty out your boots in the morning before putting them on to make there wasn't a scorpion hiding out inside.  Just like in the old westerns.  I've lived in California my whole life and had never seen a scorpion until we moved to the East Bay hills, far from the desert landscapes of the southwest. So much for critter stereotypes! 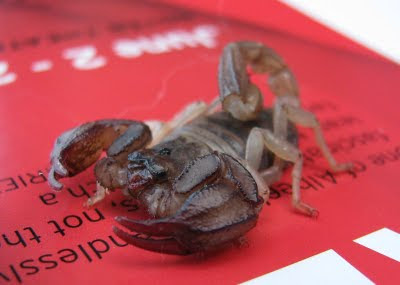 One night, lying in bed, I saw a strange bug on the wall almost at the ceiling. I got up to take a closer look and knew immediately it was a scorpion.  I almost freaked out.  How did it get  there?  I went on-line and found out they are actually quite common in the Bay Area.  They live under rocks, and since the hillsides around our house are quite rocky, they are among the neighborhood's indigenous critters.  Since that first encounter, we have found a few others in the house, and a couple more while working in the yard.  This morning we found this little critter in our bedroom.  We think this guy is a California Forest Scorpion Uroctonus mordax after looking at these photos on bugguide.net. 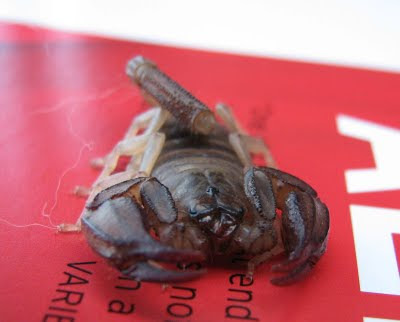 We don't worry about them as much anymore after reading that this species is not all that poisonous--no worse than a bee sting.  And the coolest thing about them is that they glow under a UV light, like the millipedes we blogged about in February.
Posted by Paul Why at 9:04 AM