We Caught a Fox 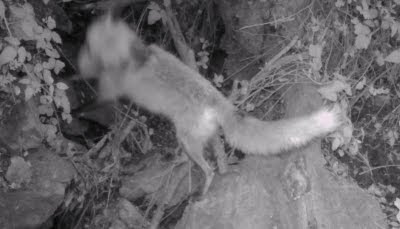 When we bought the game camera, we were hoping to get photos of a variety of critters crossing through our backyard.  It has been recording a lot of activity, but lately it has mostly been from our deer neighbors. We have seen other wildlife in the area, including raccoons (which we have caught with the game camera), opossums (but only dead on the side of the road), squirrels (every day in the trees), and skunks (OK, maybe we haven't seen them, but we have smelled them).  And we know that coyotes and mountain lions live in the open space nearby, and have been known to come close to suburban areas.  But all we get are photos of deer.  The camera had been in the same location in our backyard for a couple of months, so we decided to move it to a different site off our property. 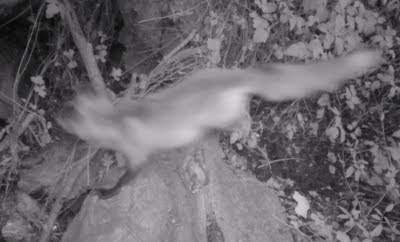 There is a large open-space park area near our house that is criss-crossed with game trails and also with several small creeks.  We decided to put the camera at a game trail/creek crossing, about a quarter mile from any house. Even though few people traipse around this part of the open space, we were a little  worried that someone might come across the camera and steal it. But we decided it was unlikely anyone would be hiking there--it is thick with brush and bramble--and worth the gamble.  We left it almost a week in one location, and got 2 photos of guess what?  Yes, deer again. So we moved it to another critter creek crossing and checked it yesterday.  Bingo!  We caught a fox in motion!  The pictures are not the best, taken at twilight in infra-red mode, and blurry.  This quick red fox was jumping over a log and some rocks en-route to a meal, perhaps. 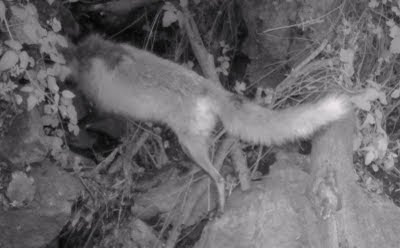 We will leave the camera in that location for a week or 2 and see if we can get a better photo, or with any luck, some other critters as well.
Posted by Paul Why at 2:37 PM