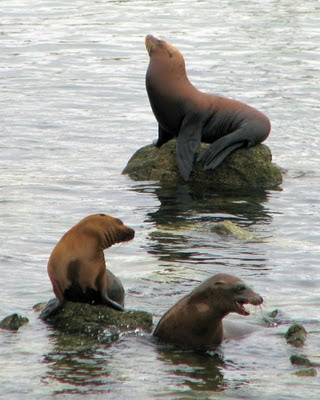 I just finished reading an enjoyable article in The New Yorker by Ian Frazier about seals and sea lions.  I was amazed to read that people in New York will spend 24 bucks to go on a boat with the hope of catching a glimpse of a seal, and that 20 years ago there were no seals anywhere near New York City.  Here in the bay area of California, one simply has to go to any  harbor and look around.  They are everywhere.

I remember visiting the Santa Cruz Wharf when I was young, and imitating the barking of the sea lions below the pier.  For 50 cents you could buy a small paper plate of  'seal food', a few finger-sized mackerel, that you could toss to the seals in the water around the pier. I'm sure that's against the law these days. 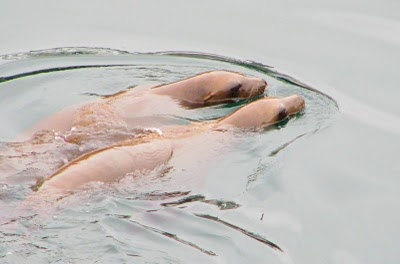 Fraizer mentions the term 'charismatic megafauna,' which is applied to animals that people love to love.  Animals that   are large enough to watch and cute enough to pull at your heart strings.  And lovable enough to get a bunch of people to write to their government and demand that these critters be protected.   And popular enough for law makers to pass legislation to protect them so they can say, 'Look what I did'.  Deer, panda bears and elephants also fit into this category, but scorpions, pigeons, and possums do not.  The term was coined to point out that there are a lot of tiny, ugly critters on the brink of extinction that do not get this same kind of support.  What should we call them?  Repulsive micro-critters? 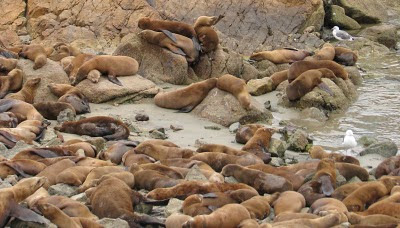 We took the photos on this page in Monterey last summer.  These California sea lions (Zalophus californianus) are the same species that are trained for circus acts and marine live shows.  Here, they had taken over the beach rocks all around the pier.  They were also beaching themselves on private yachts and docks.  And pooping everywhere.   Cute critters, but somewhat messy and smelly, as well. 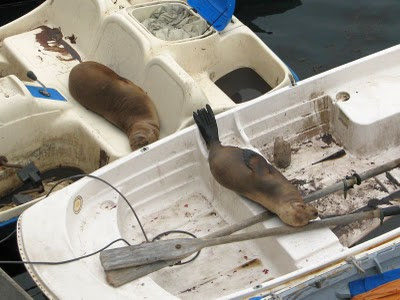