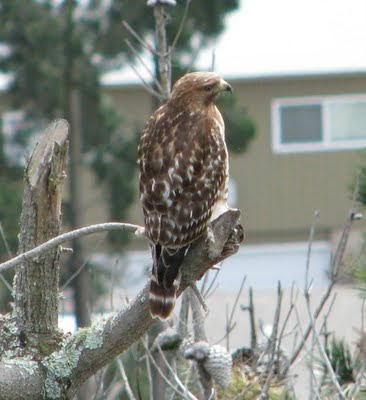 We have some new neighbors. A trio of red-shouldered hawks (buteo lineatus) showed up about two weeks ago.  They have been hanging around ever since with a big noisy presence that is hard to ignore, not that we would want to. The Cornell website "All About Birds" says these hawks are one of the most vocal hawk varieties in the United States, and we can attest to that.
These critters screech loudly and often during the day. It's a wonder they catch anything to eat since every gopher, pigeon and snake in the county must be able to hear them. 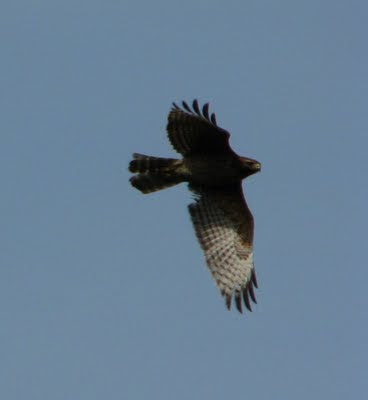 They ride the updrafts on the hillside, and then swoop and play with each other.  Later they will land in a nearby Monterey pine and screech at each other some more.  This behavior closely resembles a mating ritual called a "Sky Dance" as described by Kari Kirschbaum of The University of Michigan .   It is strange that there are three of them, perhaps a oiseau "menage a trois"?


The ravens here will chase after every red-tail hawk that comes by, but they have been leaving these red-shouldereds alone, even though they are a smaller bird by a good five inches in length and about 10 inches in wingspan.  We're not sure if the ravens do not consider them a threat, or if the red-shouldereds are more agile and not so easy to pick on without getting picked at back. 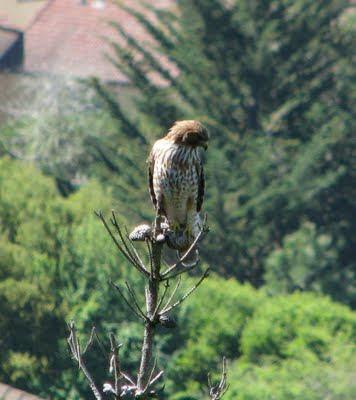 Red-shouldered hawks, red-tail hawks and other Buteo's are called buzzards in Europe.  Here in the USA we think of a 'buzzard' as a another name for a turkey vulture, but this is not correct.  It seems that early settlers, in colonial times, mistakenly called our soaring vultures 'buzzards', and the name has stuck.  I got this factoid from the Turkey Vulture Society web page.  No kidding, there is a Turkey Vulture Society!

We hope they are building a nest nearby, but we have not seen it.  We'll be watching with binoculars in hand. 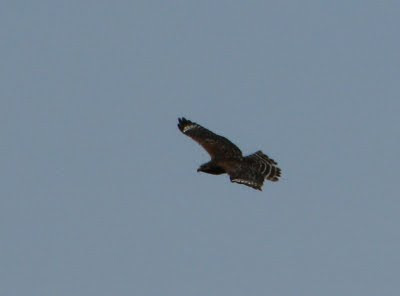 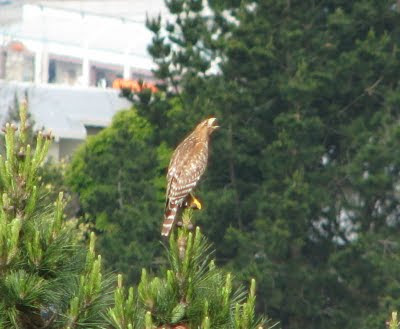