A Green Anole on Maui 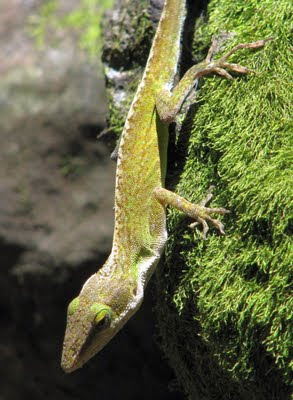 After hiking around Haleakala (the tallest dormant volcano in the world, on Maui during our vacation last week, we stopped at a Mexican restaurant for lunch. They seated us right at a window with a view of a neat little rock garden just outside. And while we were eating, this guy appeared on the rocks.  He sat in the sun for awhile, then scurried to and fro, jumped from rock to rock, then lazed in the sun some more.  Every time a fly or other insect buzzed passed him, he would lift up his head and watch it closely, but we never saw him catch one.

He has a dewlap or throatfan under his chin that he would open up from time to time.  It was bright red or orange in color and would stick out from under his neck by half an inch or so.  He wouldn't do this when I had the camera on him, though. But, here is a picture of a gecko with his dewlap out.

The waitress said it was a gecko, and they like the geckos on Maui because they eat a lot of bugs.  A gecko in your house is considered a good sign.  But after researching him up on the web, I see he is not a gecko, but  a Green Anole (Anole carolinensis), a lizard that is native to the the southern United States and was introduced to Hawaii in the 1950's.  Some say they escaped from a pet store. Who could blame the critters? Life in a Maui rock garden beats a box in a pet store.