A fox in our backyard 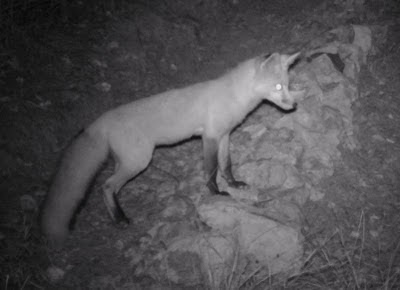 Going through the fridge last week we found a Tupperware container with the remnants of three-week-old arroz con pollo. There was one piece of chicken left, a drumstick.  It was too old to eat, of course, and we don't put meat in our compost bin. But just tossing it seemed wrong. Repurpose! We got a bright idea: let's put it in front of the trail cam and see who comes to dinner! 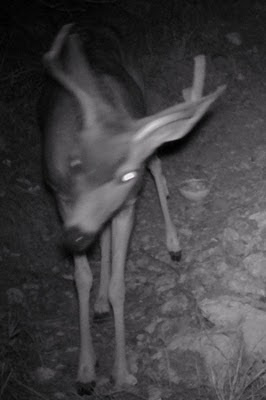 We have been moving the trail camera to different locations in the hills here and have not gotten a lot of postable pictures.  We did see a few house cats or feral cats by a creek nearby (perhaps I'll post those later), and a bunch of blurry deer pictures.  We moved the camera into our back yard and put the drumstick a few yards in front of it.   A day later, the morsel was still there in front of the camera, but a couple of days after that it was gone.  We went to get the card out of the camera and 'OH NO' the batteries in the camera had died and there were no photos on the card. 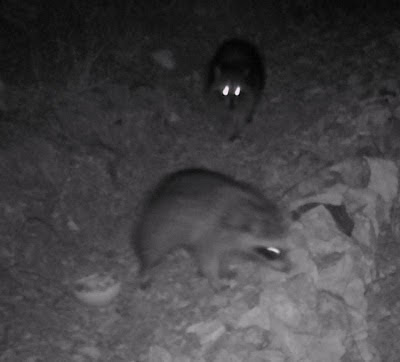 Not completely daunted by this, we looked in the fridge for another item a critter might enjoy, and found a half of a cantaloupe that was never very good anyway and getting kinda old. We put it in front of the camera and 2 days later, voila, several very good pictures of a fox!  And a pair of raccoons, and a young buck.  All came to investigate the melon.

I'm not sure the species of the fox, all foxes look gray in the IR light at night. 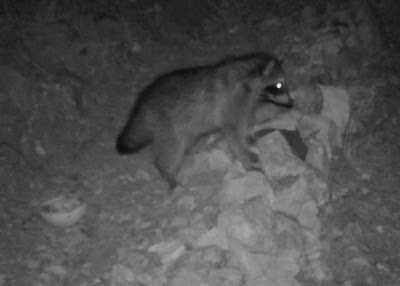 Strange though, all they did was nibble on it.  It's still there.  Maybe we will get more pictures yet. Or maybe, like us, they didn't think the melon was very tasty.
Posted by Paul Why at 9:29 AM